Blackleg resistance has been available in commercial canola varieties since the early 1990s. A shift towards increasingly virulent strains of the blackleg fungus has resulted in the breakdown of resistance in many traditional canola varieties.  Increasing canola acreage and shortened rotations have contributed to this.

Not all R-rated varieties provide the same level of blackleg protection and an R-rating does not mean the variety is immune to blackleg or resistant in all geographies. An R-rating of an older variety was established against blackleg strains that may no longer be prevalent, whereas newer R-rated hybrids have been tested against current strains of the fungus and provide good protection against blackleg in the majority of locations. Numerical ratings are not a preferred indicator of resistance as they are derived from performance at specific locations against specific blackleg strains in specific years and may not reflect how the variety performs across a range of geographies.

There are two types of resistance genetics for combatting blackleg disease:

Multigenic resistance simply refers to more than one resistance gene.  All varieties sold in Western Canada rely on multiple genes for blackleg resistance. What differentiates the level of protection is the particular combination of resistance genes which determine how a variety performs across a range of environments and against a range of blackleg strains. 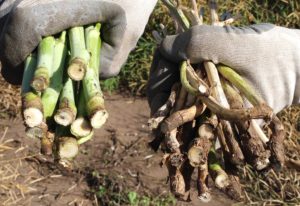 Plant breeders are in a race to stay ahead of blackleg by incorporating more effective resistance genes into canola hybrids. The challenge is to identify effective R genes that work well against the current predominant blackleg strains. The best and most durable blackleg resistance is derived from a combination of both solid quantitative resistance plus strategic use of effective major R gene resistance.

Nutrien Ag Solutions varieties are tested thoroughly across Western Canada and Proven Seed has a leading line-up of new R-rated varieties.  PV 533 G has consistently demonstrated exceptional blackleg resistance effective against current prevalent strains of the fungus.  The next generation of hybrids from Proven Seed, including new PV 540 G, offer world-class protection with our continued evolution of blackleg resistance genetics.

Clubroot is a serious threat to both current and future canola production due to its high potential for adaptation, especially in regions of intense canola production and shortened rotations. Clubroot has many pathotypes (strains) which can exist in the soil of an infested field as a population. Since the disease was identified as problematic in canola in 2003, the predominant strain in fields has been P3.  Resistance in most clubroot-resistant (CR) hybrids is becoming ineffective as multiple new strains are virulent on these hybrids, including the 5X strain.

Resistance ratings for those genetics that can help combat clubroot disease include:

1. Resistant: Carries genetics which result in a reduction of disease by less than 30% of a fully susceptible variety. Resistance does not mean that the variety is immune to the disease and some galls may still be produced if the disease is present in the field.

– Single gene: a single resistance gene which is effective against the predominant strains. Can be grown in areas with low levels or no clubroot to keep spore levels low. These varieties should not be grown repeatedly in a short rotation as it increases the speed of which a shift towards more virulent strains will occur.

– Multigenic: more than one resistance gene. Offers additional protection, reduces selection pressure and enables resistance to remain durable for longer. An excellent tool to rotate genetics where current CR hybrids are still effective but the risk of becoming susceptible is still high.

2. Intermediate resistance: Can have infection levels up to 70% of what a non-resistant variety would exhibit. These varieties on the market today carry a single clubroot-resistant gene resistant to P3, but have intermediate resistance to P5X.  If 5X is present in the field, galls can be produced in sufficient quantities to cause significant yield loss, in addition to proliferation of spore load which will affect future crops.

Plant breeders are in a race to stay ahead of clubroot by looking for alternative sources of resistance to develop new hybrids with protection against new virulent pathotypes.  As the clubroot threat continues to evolve, canola varieties with multiple effective resistance genes are the first line of defense, offering additional protection and durability. Crop rotation is central to long-term disease management and will help preserve the resistance genetics currently available.

No variety is a ‘silver bullet’ for fields with high levels of clubroot or where resistance in CR varieties has broken down. Proven Seed introduced the first and only true multigenic canola variety with PV 580 GC. In addition to resistance to the predominant pathotype 3, PV 580 GC carries an additional gene which is effective against some additional emerging virulent strains. It offers an alternative clubroot genetics package for growers in high risk areas.